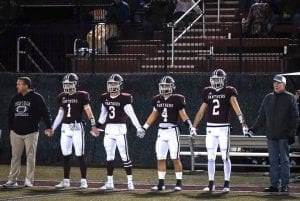 Pikeville continued its march to Kroger Field with a 54-14 beat down of Nicholas County in the Class 1A regional championship game played at Hillard Howard Field on Friday night.

The Panthers, now 12-0, won their 24th regional championship while advancing to host Louisville Holy Cross (11-2) next Friday night with a berth in the title game on the line.

Quarterback Isaac McNamee passed for 197 yards and a pair of touchdowns while running back Cody Raines had 127 yards and scored three touchdowns in the opening half on only five carries as Pikeville built a running-clock lead of 40-0 at halftime.

Running back Carson Wright had four rushes for 80 yards and two second-half touchdowns.

Peyton Boyd-Blair picked off a pass and returned it 25 yards for a touchdown.