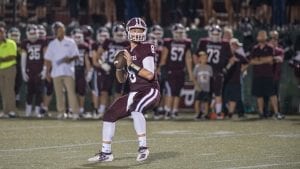 Pikeville punched its ticket to the Class 1A state championship game for the second straight season with a dominating performance at Hillard Howard Field on Friday night.

Quarterback Isaac McNamee passed for 270 yards and four touchdowns and Pikeville’s defense limited Louisville Holy Cross to a mere 33 yards until late the game in a 36-7 victory.

McNamee tossed TD passes of 21, 27, 40 and 20 yards as the Panthers moved to 13-0 with the win. Running back Cody Raines had 58 rushing yards and one score and hauled in a 21-yard pass for another.

Pikeville advances to face Paintsville (11-3) next Friday afternoon at Kroger Field. Kickoff is set for 2 p.m. The Panthers edged the Tigers, 9-8, in the regular season matchup in Paintsville.