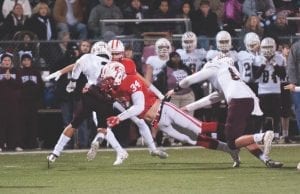 When Ashland Blazer won the toss and elected to receive it lit a fire under Belfry which turned into a raging inferno at CAM Stadium on Friday night.

The Pirates scored on all four of their first-half possessions and went on to scorch the Tomcats, 41-7, to win its first regional championship since 2016.

Belfry, now 9-3, will journey to Louisville DeSales next Friday night to face the Colts with a berth in the Class 3A state championship on the line.

Running back Ben Bentley led a bone-jarring ground attack with 139 yards on 12 carries while Isaac Dixon added 89 yards and one rushing score on 11 rushes and hauled in a 76 yard pass for another.

Peyton Hensley finished with 84 yards on 13 rushing attempts and three first-half touchdowns as the Pirates built a 28-0 lead at the break.

Quarterback Brett Coleman was 3-for-3 passing and 86 yards.

Isaiah Birchfield’s 41-yard interception return for a touchdown with 5 minutes, 19 seconds left in the third period pushed the lead to 41-0 and a running clock.