First UK freshman named to the AP All-SEC team since Austin MacGinnis in 2014  University of Kentucky true freshman defensive lineman Deone Walker was voted Associated Press Second-Team All-Southeastern Conference, it was announced Monday. He joins Quinshon Judkins of Ole Miss and Harold Perkins of Louisiana State as the only three freshmen represented and is […] 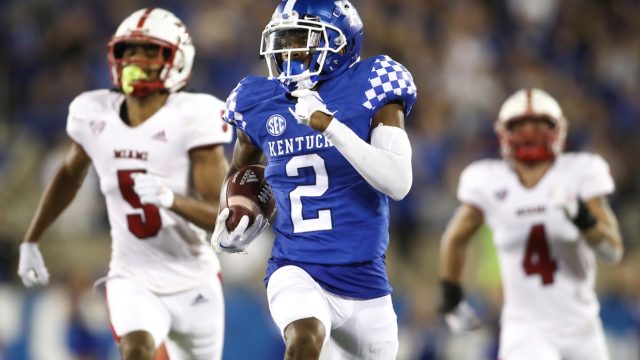 In a rematch of one of the most exciting games of the 2021 bowl season, Kentucky Football is headed to Nashville to take on Iowa in the TransPerfect Music City Bowl on New Year’s Eve. The Wildcats and Hawkeyes will tangle at noon ET (11 a.m. Central time in Nashville) at Nissan Stadium in a game […]

Cason Wallace scored 14 points and Oscar Tshiebwe had a double-double to lead No. 19 Kentucky over Michigan 73-69 on Sunday at the O2 Arena in a London showcase of two marquee American college sports teams. Wallace, who finished with 14 points, was 4 of 4 on 3-point shooting with his most important one giving […]

Bellarmine, known for its bulldog defensive mentality, had No. 19 Kentucky turn the tables on them in the second half as the Wildcats took control midway through and went on to score a 60-41 victory at Rupp Arena on Tuesday night. The Wildcats improved to 5-2 while dropping the Knights to 2-6. UK has now […]

Photo Credit: UK Athletics Kentucky’s defense forced three turnovers and bottled up the Cardinals offense much of the game to win the Governor’s Cup matchup, 26-13, at Kroger Field on Saturday afternoon. The Wildcats finished the regular season at 7-5, and now await their bowl fate. The announcement will come on Dec. 4. Quarterback Will […]

COLLEGE FOOTBALL: Defense shined in loss to No. 1 Georgia

Kentucky’s defense held top-ranked Georgia to three first-half field goals but a missed late field goal by the Wildcats took away any chance of a fourth quarter rally. The Bulldogs added a second half touchdown and went on to beat Kentucky, 16-6, in the SEC East matchup played at frigid Kroger Field on Saturday. Kentucky […]

Kentucky’s slow start against Gonzaga doomed the Wildcats as the Zags cruised to an 88-72 win in the first game of this six-game series played in Spokane, Wash., on Sunday night. The loss dropped the Wildcats to 3-2 overall, with both defeats coming to conference powers. Kentucky cut a 16-point halftime deficit down to four midways […]

Number four Kentucky built a 19-point halftime lead and pulled away in the second half to beat South Carolina State, 106-63, in a game played at Rupp Arena on Thursday night. CJ Fredrick led a balanced attack with 17 points as the Wildcats moved to 3-1. Chris Livingston followed with 13 while Cason Wallace and Lance […]

Number four Kentucky’s first big challenge of the year ended in a double overtime loss to Michigan State, 86-77, at Gainbridge Arena in Indianapolis on Tuesday night. The Wildcats are now 1-5 in last six Champions Classic games. National Player of the Year Oscar Tshiebwe played in his first game back from an injury and finished […]

Photo credit: UK Athletics Vanderbilt came into Kroger Field and scored a stunning 24-21 victory over Kentucky on a cold and snowy Saturday afternoon. Commodores’ backup quarterback Mike Wright tossed an eight-yard TD pass to Will Sheppard with just 34 seconds remaining to give Vandy the margin of victory. It was the Commodores first SEC […]