Fall baseball is back in the Bluegrass.

Kentucky baseball will host an exhibition game on Sunday, October 9 when Marshall arrives at Kentucky Proud Park. First pitch is at 1 p.m.ET and admission is free.

NCAA rules allow for schools to play two games against outside competition during the fall. The Wildcats also will travel to Mason, Ohio to face Xavier at Prasco Park on Saturday, Oct. 22.

The Cats are entering their seventh season under head coach Nick Mingione and have won 176 games during his tenure, including a 33-win season in 2022. Mingione now is third on Kentucky’s all-time coaching victories list and owns the second-highest winning percentage among coaches who were at the helm for 100 or more games. 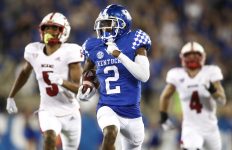