DUNBAR, W.Va. – University of Pikeville saw an early two-run lead slip away in game one of a  doubleheader as Goshen College rallied for a 5-4 victory in a matchup played at West Virginia State University on Sunday.

Jordan Davy suffered the loss as the Bears dropped to 4-7.

Kase Mattingly had a single and drove in a pair of runs while Eduardo Bello single home another run. Tyler Menrath singled and scored while Noah Helton doubled and scored.

DUNBAR, W.Va. – University of Pikeville’s Pastor Sanchez delivered a walk-off single in the bottom of the seventh inning to cap a three-run rally, lifting the Bears to a 9-8 win over Concordia (Mich.) to earn a doubleheader split on Sunday.

Sanchez had a pair of singles and knocked in three runs as the Bears moved to 4-6. Dillon O’Grady doubled, singled and batted in two runs . Greg Lile singled and added an RBI while Noah Helton singled and scored three times. Tyler Menrath singled, walked twice and score.

DUNBAR, W.Va. – University of Pikeville used a five-run, fifth inning to pull away and beat Goshen College, 6-0, in the second game of a doubleheader played on Saturday.

Ronaldo Tijero doubled and drove in a pair of runs as UPIKE moved to 3-6. Tyler Menrath singled and scored two runs. Eduardo Bello added two hits, scored and knocked in one run while Pastor Sanchez and Noah Helton each singled home one run and scored. Kase Mattingly had an RBI and scored.

Brady Cappe was the winning pitcher.

DUNBAR, W.Va. – University of Pikeville fell behind early on to Concordia (Mich.) and the Bears dropped a 5-3 decision in the first game of a doubleheader played on Saturday.

Tyler Menrath singled and had an RBI while Roy’ce Brittentime added an RBI. Demarco Miller scored a pair of runs. 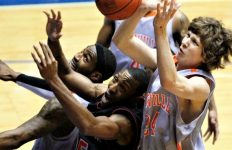 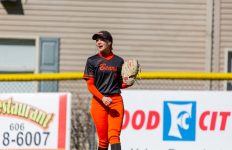