Betsy Layne rallied for three runs in the bottom of the eighth inning to earn a wild come-from-behind win over Martin County, 10-9, in a home game played on Wednesday night.

The Bobcats, now 4-15, trailed 7-0 going to the bottom of the fourth inning. Five runs crossed the plate and then two more in the seventh to tie the game at 9-9.

Brady Hall had two hits, including a double, and drove in three runs while scoring twice. Cameron Pente, winning pitcher Brady Robinson and Keaton Brown each knocked in a pair of RBIs.

Man scored a pair of runs in the seventh inning and then plated three in the bottom of the eighth inning to slip past Chapmanville, 6-5, in a game played at William “Tootie” Carter Field on Wednesday night.

Winning pitcher Preston Blankenship singled in one run and scored as the Hillbillies improved to 11-8. Josh Lamber added two singles and batted in one run. Caleb Blevins and Cam Fyre singled, walked and scored twice.

Tyson Thompson singled in a pair of runs for the Tigers, now 7-15. Jake Justice had three hits, one a double, scored and drove in one run. Seth Workman added an RBI single.

Jacob Topping was the losing pitcher in relief.

Lawrence County continued to get outstanding pitching down the stretch as the Bulldogs beat Greenup County, 4-1, in a game played at home on Wednesday night.

Bryce Blevins doubled in one run and scored while Braydan Maynard and Ethan Whitt both reached base and scored.

Magoffin County’s offense was silent for much of the game as Breathitt County scored a 4-1 win over the Hornets in a game played on Wednesday.

Losing pitcher Lucas Litteral had a pair of singles and Caleb Howard singled and scored the lone run for Magoffin County, which dropped to 15-9.

Sam Brown was the losing pitcher for the Wildcats, now 9-17. He also had a base hit along with Ben Johnson. Only one other Wildcat reached base. 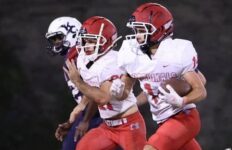