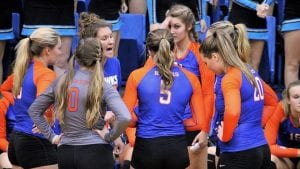 Wells was named today as the Mountain Top Sports Player of the Year, edging out Martin County senior Madison Thompson, who had 376 kills, 120 blocks, 44 assists, 205 digs and 54 serving aces as the Lady Cardinals finished the season at 23-12.

Pike County Central head coach Suzanne Preece was named Coach of the Year. She led the Lady Hawks to the 15th Region tournament finals and a 21-10 record.