PIKEVILLE, Ky. – Not every great athlete picks up their sport early in life, and that seems to be the case with UPIKE sophomore golfer, Emily Brown.

Brown, who hails from Catlettsburg, Ky., said she picked up her feature sport in middle school.

“My eighth grade year, middle school, I found a flyer on the wall,” Brown said. “I took it home and I told my parents that I wanted to try it, so they set me up with my grandparents’ clubs. The first day of practice I swung the club for the first time and the coach said they could work with it.”

Brown said that many were surprised with how quickly she picked up the sport, but it should be no surprise at all considering the legacy left behind by one of her great grandparents.

Huck Ford, Brown’s great grandfather on her mother’s side, was a golfing natural according to Brown.

“He played with some of the greats, like Arnold Palmer,” Brown said.

Brown said as time went on she continued to grow in skill, but remained somewhat intimidated by players who had been at it longer than she had. But, she said, she still competes. For Brown, golf comes easy, she said it’s an escape.

“When I finally find the right swing, and I zone in on the task at hand, it’s almost effortless,” Brown said.

Brown said golf is like a puzzle, something that you build on. But, Brown said, that puzzle is constantly changing and you have to continue moving forward with the pieces that you laid before.

Brown said that she is happy she found the sport, it builds lifelong connections, and she plans to teach her future children about the clubs one day.

For more information about Brown and statistics around her career, visit www.upikebears.com. 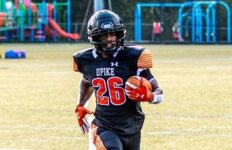 COLLEGE FOOTBALL: Bears move to 2-0 after rout of Webber International→