Paintsville running back Harris Phelps rushed for 155 yards and four touchdowns to lead the Tigers to a 42-16 playoff win at Bishop Brossart this past Friday night on the road.

His effort helped his team advance to the Class 1A regional championship game while being named the Buffalo Wild Wings Player of the Week honors.

Shelby Valley running back Jayden Newsome rushed for 227 yards and two scores on 31 carries, including the game winner late to send the Wildcats to the regional finals.

Martin County running back Brock Messer carried 15 times for 145 yards and three touchdowns. He scored on runs of 89, 6 and 3 yards.

Johnson Central running back Zack McCoart rushed for 71 yards and two touchdowns on seven rushes. Chase Price led the way with 99 yards and one score.

Pikeville quarterback Isaac Duty tossed a pair of touchdown passes – one each to Wade Hensley (50 yards) and Blake Birchfield (31 yards). He finished 5-of-8 and 92 yards.

Pikeville running back Brenden Anthony had a pair of first half touchdown runs of 11 and three yards. Tayvian Boykins finished with 89 yards rushing on six carries and a 45-yard rushing touchdown. 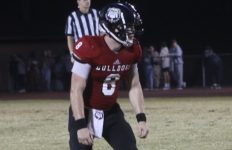